The Sweep and the Apprentice, Sooty

Inspired by Charlie Chaplin’s “The Kid”, “The Chimney Sweeps: A Family Business” is a piece of family theatre with nostalgic airs that brings back the charms of the Victorian era in Mary Poppins style. It is a silent show choreographed to an original music score, and it includes original jigs, dazzling acrobatics, juggling, humour and a full load of charm.

The idea for this show was ignited a few years ago by a review of another show of hours, in which The Apprentice did a cameo appearance. This is the review, featured in the blog Tales from the South Bank

The image of the chimney sweeps is widely recognised and it brings good humour to those hard times. It also recuperates a traditional circus and vaudeville experience that has been lost in live entertainment nowadays, but an experience that everybody can feel identified with, which is family theatre performed by a father and his child. The show has the special appeal of having a very talented child performer, who shows a very engaging relationship with his father and partner in crime.

Thank you to our Crowdfunder supporters

Special thanks to Justin and Victoria Dethier for their support in buiding the chimney stack and to Alison Miles Manning for her help in decorating it! 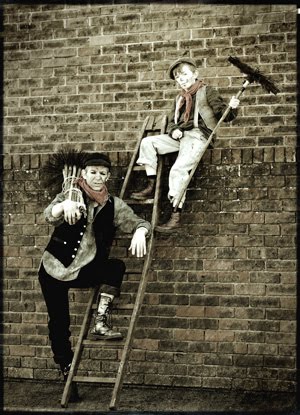